Ginger Cultivation: How to Grow Ginger

Sowing and growing ginger is very easy- all it needs is loose soil and free flowing water for ginger cultivation. Learn how to grow ginger. Complete information on ginger farming in India with planting, plant protection, harvesting and curing.

Zingiber officinale, commonly called ginger is widely used as a spice and is a popular home remedy for acidity, cold, cough, etc. It belongs to family Zingiberaceae– same family as turmeric. It is the root (rhizome) of the plant that is most useful. Recognizing ginger is very easy as the leaves carry the pungent smell typical of ginger. Apart from their use as a spice, young roots of ginger are used as flavoring agents in Chinese and Japanese cuisine.

Ginger plant looks slender like a reed which is 3-4 feet tall. The leaves are thin and green in color. The beauty of the plant is that it produces pink and white flower buds in clusters which bloom into yellow flowers. Some people use this plant for landscaping owing to this precise reason. When the stalk starts withering, crop is harvested and rhizomes are washed.

Ginger, like turmeric, can grow under both irrigated and rain-fed conditions. The best time for planting is just after the pre-monsoon showers. In case there are no pre-monsoon showers, then irrigation is necessary. Else the seed rhizomes would dry up.

Ginger is cultivated at an altitude of 1500 meters above sea level in warm and humid climate. A moderate rainfall during sprouting time and a heavy, well-distributed rain at the time of growth is the most ideal situation for growing ginger. In case of absence of showers during sprouting period, the crop must be irrigated. The soil must stay moist so that sprouting happens. However, the weather must be dry before harvesting.

Soil that has good drainage capacity such as clay loam, sandy loam, and red loam with rich humus content are good for ginger cultivation. It can also grow in lateritic soil which is well-drained. Sandy loam is however, the best for cultivation. Once harvested, it is not advisable to cultivate ginger in the same soil for a period of two years.

Ginger being pungent, the soil pH must be between 5.5 and 6.5. This would ensure healthy growth of the plant and good rhizome production. A highly acidic or alkaline soil interferes with the growth of ginger.

Ginger is an exhausting crop as it draws a huge amount of nutrients from the soil. Therefore, crop rotation is necessary. It is most commonly rotated with tapioca, maize, paddy, ragi and vegetables. It is also mixed with castor and red gram. In Kerala, it is grown as an inter-crop with arecanut, orange, coffee and coconuts. In case of crop rotation with vegetables, using potatoes, chillies, tomatoes, peanuts and brinjal must be avoided since they are hosts for Ralstonia solanacearum which is a wilt causing agent.

Rhizomes are used for cultivation of ginger. The seed rhizomes must be whole, free of pests and diseases. They must not be treated with chemicals as the treatment affects the growth. In addition, the ginger thus grown cannot be called ‘organic’ ginger.

If ginger is being planted in a rain-fed area, nature would take care of the watering schedule. However, the soil must be checked regularly. It is necessary to ensure that there is no water logging in the soil. In case of irrigation the supply must be regular and not discontinuous. At the time of irrigation, continuous and careful monitoring is needed so as to prevent water stress in the crop or sunburn in the newly developed shoots. Too much water would also cause wilting which would in turn affect the final yield.

When the temperatures reach 31⁰C, irrigation must be started. The young shoots are at risk of sunburn when the shade temperatures go beyond 32⁰C. This is most likely to occur between 10 AM to 3 PM. During irrigation, ensure that only the top 2 cm soil is wet. The soil must be checked for moisture content regularly especially on still days when there is no wind. 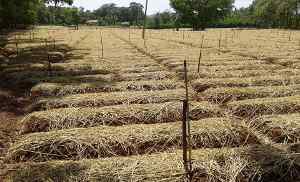 Land for ginger planting must be dug thoroughly and ploughed 4-5 times. This is typically done when the initial pre-monsoon showers set in. In some places, the surface soil is burnt as it helps rid of pests if any. In addition, it makes the soil more porous and healthier for ginger cultivation. Digging and ploughing ensures that soil is well-suited for sowing the rhizomes. For rain-fed crops, beds of 15cm height and 1m width are dug. The length can be as per convenience. A space of about 50cm is maintained between the beds. In case of irrigated crops, ridges are made in the soil at a distance of 40cm.

Solarisation is done primarily to get rid of the nematode infestations and rot disease. This step is not required if the surface soil is burnt. If there is no burning, then solarisation is recommended. The beds are solarized using transparent polythene sheet for a period of forty days.

How to Plant Ginger

Since ginger is grown from its roots called rhizomes, seed rhizomes from previous harvest are carefully preserved. They are cut into small pieces of 5cm length. Each piece must have one or two good buds for growth. The yield varies from region to region. It may be 600-700 kg/acre in Kerala while 800-1000 kg/acre in higher altitudes. The bits of rhizomes are treated with 0.3% mancozeb (3g per litre water) for half an hour, dried under shade for 3-4 hours and then planted. Drying must be done under shade else the rhizomes would dry up. The pieces are then planted in shallow pits, covered with rotten farmyard manure and soil. At the time of sowing a gap of 20-25cm must be maintained between the rhizomes. After sowing, till the plants grow, ginger is susceptible to different diseases and infections. Utmost care and monitoring is necessary at this stage. Here are some of the diseases and pests that affect the growth of ginger.

It is the most destructive disease in ginger farming in India affecting the ginger crop.

It is a type of fungal infection caused due to the moisture content in soil. The fungus builds up along with the soil moisture especially during the monsoons. Young sprouts are the more susceptible ones. The collar region of the pseudostem affected by soft rot becomes water-soaked. The rotting spreads reaching the rhizome. The rhizomes grow soft and begin rotting and hence the name ‘soft rot’.

It is a soil and seed borne disease occurring during southwest monsoon.

The plant yellows and wilts severely.  This is because the bacteria are focused around the vascular tissues in such high concentration that the vascular systems of the plant get blocked. As a result, the plants are deprived of nutrients and water from the soil. This affects the growth and development of plant ultimately resulting in its death.

Being a soil and seed borne disease, it spreads through soil. The disease being more prevalent during monsoon, there should be no water logging in the soil.

As the name suggests, the disease causes water-soaked spots on leaves.

The leaves of the plant develop water-soaked spots which later turn white. The lesions enlarge and coalesce forming necrotic areas.

The disease spreads through the water splashes caused during intermittent showers. This incidence is severe in case of ginger grown under exposed conditions.

Spraying the crop regularly with 1% Bordeaux mixture or 0.2% mancozeb can help control the disease.

There are nematode pests that cause root galls, rotting, lesions, root knot, burrowing, etc. in ginger. They cause rhizome rot and thus a heavy loss to the crop.

They cause root galls leading to rotting of the plant around the roots. The infestation of nematodes also leads to rhizome rot.

It is a very serious infection in ginger which causes holes in the pseudostems. It more prominently occurs during September-October months and reduce the yield in ginger farming.

The larvae of the insect drill a hole into the pseudostem of ginger and feed on the tissues on the inner side of the pseudostem. This results in yellowing and drying of the leaves. Spraying 0.1% malathion during the months from July-October every 21 days would take care of the pest. Spraying must be done as soon as the first symptoms are seen on the top leaves. Another strategy is to prune the leaves and destroy the freshly infested pesudeostems every two weeks beginning from July-August.

Like turmeric, ginger is also affected by rhizome scale.

The pests causing rhizome scale affect the rhizome in the later stages of growth and during storage.

Adult scales are circular in shape and brown to grey in color.

Seed rhizomes must be treated with 0.075% quinalphos for at least twenty minutes before storing. This process can be repeated in case infestation is detected at the time of sowing. However, severely infested rhizomes must be discarded as soon as they are detected. 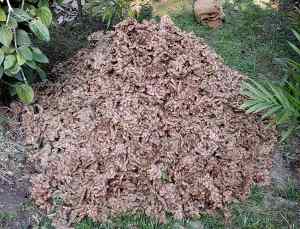 Ginger crop generally takes eight months for harvesting. It is ready when the leaves start yellowing and gradually drying. The ginger clumps are lifted carefully from the soil. The rhizomes are separated from the leaves and the roots and soil adhering to it is cleaned.

After harvesting the rhizomes are washed in water and sun-dried for one day to obtain fresh vegetable ginger. For obtaining dry ginger, the process followed is:

Fresh ginger 20-25% of dry ginger- however it depends on the variety and place of cultivation.

Seed rhizomes must be stored in pits under shade to ensure good germination for the next cycle. Healthy rhizomes are selected immediately after harvest. Generally, such clumps are marked in the field when they are 6-8 months old. The rhizomes are treated with 0.075% quinalphos and 0.3% mancozeb for half an hour and then dried under shade. They are then stored in pits dug in shaded areas. The wall of the pit must be coated with cow dung. The rhizomes are placed in the pits in the following manner:

Both the layers are alternated with each other till the pit is 3/4th full. 1/4th area at the top is left empty to provide space for aeration. The pits are then covered with planks. The seeds must be checked once in every two weeks for infections. Shriveled, diseased rhizomes must be removed.

Ginger farming- organic or non-organic is commercially viable and profitable if you know how to grow ginger and take care of it. The cost of cultivation for ginger (organic) is approximately 44,000/- per acre. For non-organic farming the cost may go upto 65000/-. At the time of selling, its farm gate cost is 8/- per Kg. However, this price varies on yearly basis.